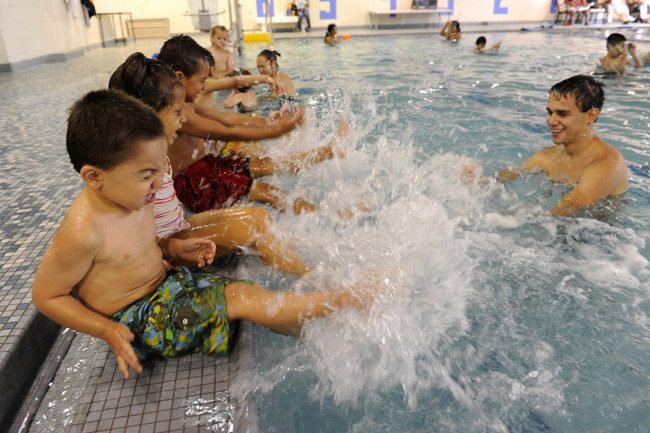 About a year and a half ago in the annual meeting there was a discussion of how the church could help the greater Vashon community.  I suggested swimming lessons for those unable to afford them.  John Bean told me there was interest in the idea, we met to discuss the next steps and then COVID hit.  Fast forward to this year when John and I had a Zoom meeting with Elaine Ott of the park district and Randy Turner, the pool manager.  They were excited about the idea so then the real work began.  Randy needed to find life guards who were excited about teaching.  He also was struggling with the constantly changing COVID requirements and the gradual opening of the pool to more people.

I relied heavily on two people, our own Marjorie Cornell who teaches English as a second language and Dr. Lydia Aguilar-Kirschner who I met while working as a vaccinator with the Medical Reserve Corps.  They both stepped up to contact families in the Hispanic community.  Lydia also broadcast the information about the lessons on her Spanish language program on Voice of Vashon.
There was immediate interest in the lessons although there were hoops to jump through.  The families were required to fill out scholarship forms for the park district and provide evidence of financial need.  Although the children taking lessons are English speakers some of their parents are not fluent.  Marjorie translated the form into Spanish and Lydia talked with many families and filled out the form herself.  Elaine and I were in frequent contact during this time as forms came in about missing information, etc.

We originally planned for the lessons to start in July and we had enough children to run one session.  As the numbers grew Randy offered to run two sessions, start in August and teach the little 4 and 5 year olds in the smaller second session. He lined up four young female life guards who he says are very excited about the program and all know a little Spanish.

This gets us back to Church of the Holy Spirit.  I met with the Outreach Committee to discuss the program and the financial implications.  The lessons cost $70 and the park district scholarship is 50% of the total.  The children will be taught for 30 minutes, 4 evenings a week for two weeks.  The first session starts August 3rd and the second session starts August 17th.  The children range in age from 4 to 15.

There are 10 families and 22 children enrolled.  Nine of the families were awarded scholarships for 20 children.  This came to a total of $700.00 which the Vestry unanimously agreed to fund.  A check was presented to Elaine Ott at the park district by Kay Pieringer for the Episcopal Swim Program.

I am deeply grateful for the interest and support of all those involved.  Many thanks.